What have we done?

Training of technicians in solar energy

This course was aimed at technicians from French-speaking West Africa, to improve their skills and spread photovoltaic solar energy. We encourage you to watch in five minutes how this experience was developed.

In 2013 we promoted Gonze cookers in the region of Lalibela (Ethiopia). It is an improved version of the traditional three stone cooking fire. It consists of three pieces of clay that are placed surrounding the cooking fire forming a watertight container that reduces to the minimum the loss of heat energy by side. The fuel consumption is reduced by 50-60%. A further advantage that brings is a significant reduction in the emission of smoke.

These three pieces can be arranged in various ways depending on what you want to cook: coffee, tea, sauces or injera (Ethiopian typical food).

The presses and molds were built in Addis Ababa and transported to ten villages around Lalibela. In collaboration with members of the Office of Agriculture of Lalibela, eighteen women with an active role in their community were chosen. They received a three-day training course to learn how to operate the press, how to choose the best clay and how to communicate the benefits of Gonze cookers instead the three stone cooking fire. These women were responsible for the development, manufacture and sale of Gonze cookers in their villages and surrounding areas with a very affordable selling price of about 2-3 euros.

Apart from the health benefits of cooking with little smoke, Gonze cookers contribute to halt deforestation in Abune Yosef massif, one of the last redoubts of the Afro-alpine ecosystem and emblematic species such as Simien wolf.. 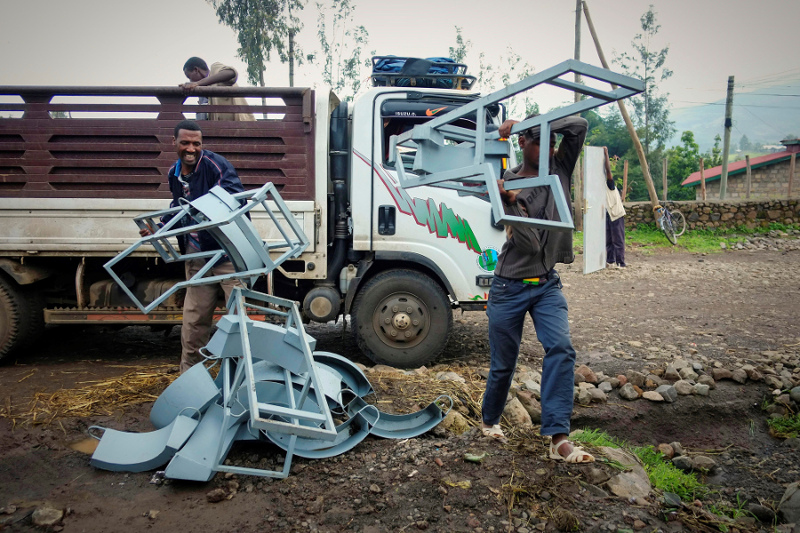 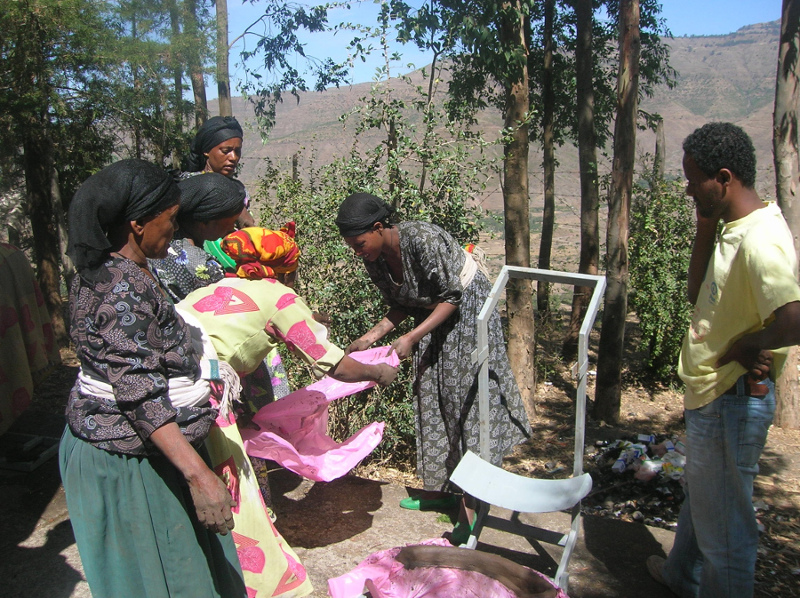 Cooking with the sun at Khorixas district (Namibia)

In Namibia, like most of Africa, the food is cooked at the so-called three stone cooking fire, fueled with firewood collected by women and children around the villages. Firewood is becoming more scarce, savannah is deforested and many people suffer from respiratory or ocular result of permanent exposure to the smoke of cooking fires. At the same time, Namibia is one of the world's countries with most hours of sunshine a year, and new technologies can take advantage of the sun to provide environmental, health and social benefits.

The "Blazing Tube", invented by John Grandinetti and Hawaiian Developing World Solar Association (DWS) is a parabolic solar cooker that heats vegetable oil, which acts as a transmitter of heat to the cooking pot on. The result is a powerful tool that we tested in northern Namibia, a joint project of DWS, Sol Solidari and local counterpart Welwitschia Development Trust (WDT).

125 Blazing Tube were brought to Khorixas and two teams distributed and assemble them in the houses selected by the local organization. The performance of the Blazing Tube was extraordinary; under the powerful Namibian sun the cookers quickly reached 150-200 ºC, cooking faster than a gas stove. We used to heat water, to rapidly show how to operate the cooker, but when we returned after spending hours or days, we could see pots with rice or meat simmering under the gaze of admiration and gratitude of the beneficiaries, often older people with reduced mobility and difficulties to collect firewood.

This test served DWS to develop improved models of the Blazing Tube. In short, another step to use a source of wealth which will never be depleted: the sun.

Promotion of the "Blazing Tube" in Burkina Faso

This parabolic solar cooker heats vegetable oil, which acts as a transmitter of heat to the cooking pot on. It was invented by entrepreneur John Grandinetti and Hawaiian Developing World Solar Association (DWS).

We introduced 60 units of this powerful cooker in Ouagadougou, thanks to the joint work of DWS, Sol Solidari and local counterpart Actualité-Energie, with whom we work regularly in Burkina Faso.

The cookers were distributed among families, women's associations and small restaurants in the neighborhoods surrounding the capital of Burkina, where access to firewood and propane gas is prohibitive for most of the population. Instead, Ouagadougou has a strong sunshine most of the year.

The project consisted of distributing stoves, train the users and track their efficiency, degree of satisfaction and detect any problems or possible future improvements. Currently Actualité-énergie offers Blazing Tubes through microcredit.

In 2012, always eager to learn between projects, we establish a competition between the typical three stone cooking fire used in rural Africa and an improved cooker called "rocket stove" to see how this technology helps to economize fuel. Here's the video, judge for yourselves the result.

In 2011, continuing collaboration with our counterpart in Cameroon Africa-EDUSA and thanks to a grant from the Castell-Platja d'Aro town council, we could offer large improved stoves to eight institutions (3 prisons, 3 orphanages and 2 boarding schools). In these centers where food for many people is prepared, solar cookers do not work and you need a much more powerful tool. The chosen cookers, designed by US Aprovecho Research Center, can prepare food for a hundred people, using up to 75% less fuel!

The cooker has been built to fit a 60 liters’ pot and has a chimney to remove smoke, even though it emits up to 85% less emissions. A short training session was performed in each institution, explaining its use and advantages, among which the possibility of using small twigs and wood, usually burning too fast at the three stone cooking fire.

In this four minutes’ video we summarize the beginning of our solar electrification project in schools and the microcredits given to families to install solar energy at home.

In 2008 we started to introduce solar ovens in Lalibela and Abune Yosef massif. Solar ovens are a kind of sealed boxes with a glass top. Working as a greenhouse, radiation entering the box cannot leave and the interior is heated like a conventional oven. It is less expensive than solar cookers, but also slower. It is particularly suitable for cooking food unattended, but it takes several hours to be ready.

In a first phase the solar ovens were given free of charge to needy families, chosen by the heads of kebeles (municipalities), as a system to introduce the new technology. Thus, during 2008 and 2009, 166 units were distributed. In 2011 we started selling ovens subsidized through public and private donations. The first 72 solar ovens were sold in a shop in Lalibela, while a unit was used outside the store to bake bread and other food. To our great surprise, all solar ovens were sold in just two days and many other women expressed their desire to buy one. Unfortunately, the lack of new funding made it impossible to continue subsidizing solar ovens in the area.

In 2012 we collaborated with various organizations to promote small solar lights as alternative method of lighting instead of the dangerous and unhealthy kerosene lamps. This video explains the project.

This project was conducted in conjunction with AGVF local women's association and the economic collaboration of Europastry SA, Camping Illa Mateua and Girona Provincial Council. The stoves are simple steel structures made from barrels which contain the cooking fire, thus saving almost 50% of firewood. The construction is done by local manufacturers. 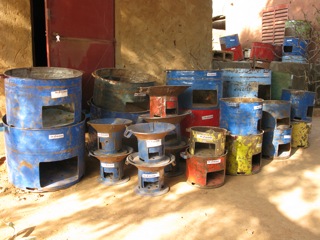 In the first phase, we manufactured and distributed for free 120 stoves to 60 schools operating a canteen. Schools received with great satisfaction a pack of two big improved stoves. The use of the cookers reduces 50% or more the consumption of firewood and shortens cooking time. It is also a great relief for the families, as they should provide the necessary fuel for their children to be able to eat at school, carrying firewood or paying the money needed to buy it. 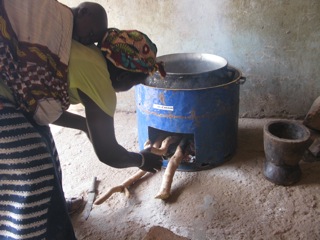 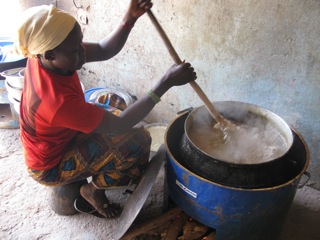 In a second phase, 1000 smaller improved stoves were manufactured and sold at subsidized prices. For this task two blacksmiths and a saleswoman were trained. Cookers aroused great interest among the population. With the profits made, AGVF manufactured and distributed more stoves with a gradual reduction of the subsidy.

The sale exceeded all expectations. If the aim was to create the workshop and sell 1000 units at 50% of the cost in Bandiagara town and surroundings, in the first year they sold over 4600 units in Bandiagara and other small nearby villages: Ouroly, Dourou, Mory, Ningari, and Odogou Diangassagou.

Follow-up by saleswomen after the acquisition indicated that the population of the Dogon country had understood the importance of improved stoves that not only provide a faster cooking, but can also save money when buying firewood and at the same time help to combat desertification. The main difficulty of the project was the rising price of the empty barrel (the raw material for manufacturing the stoves) which increased 30% in a few months.

In collaboration with a local NGO working in community development, we spread to this area of Uganda rocket stoves, together with the so-called ‘fireless cooker’, a basket insulated with a thick layer of cotton. With this tool, food brought to cooking temperature just continue cooking using the heat already obtained, while also reducing fuel consumption and making possible a second hot meal at the end of the day without cooking.

Solar ovens were allocated to groups of women to enable them to start small businesses making bread. The bread is well rooted in Uganda’s food culture so that local counterpart thought it was a good start for some local women.

In 2010, together with the NGO Africa-EDUSA, 100 rocket stoves manufactured in South Africa were introduced in Loum Chantiers neighborhood. During the training sessions organized, the same volume of water was boiled with the three-stone fireplace and the rocket stove. Women could see how the rocket was consuming less firewood and producing much less smoke. In addition, rocket stoves work with branches and twigs, currently an untapped resource because fireplaces are fueled cutting big trees from the rainforest. Branches and twigs, however, are always available in the fields or in the form of fallen branches.

A year later, rocket stoves were regularly used in the houses visited, in combination with the three-stone fireplace. Women appreciated greatly the decrease of smoke in their homes. Rocket stoves were mainly used for cooking sauces and food for small groups of people. Some started to collect branches during their work in the tree plantations and let them dry a couple of days before use them. In general, women were satisfied with the product and the only observation was that they would like something bigger and more powerful, to be able to remove forever the three-stone fireplace.